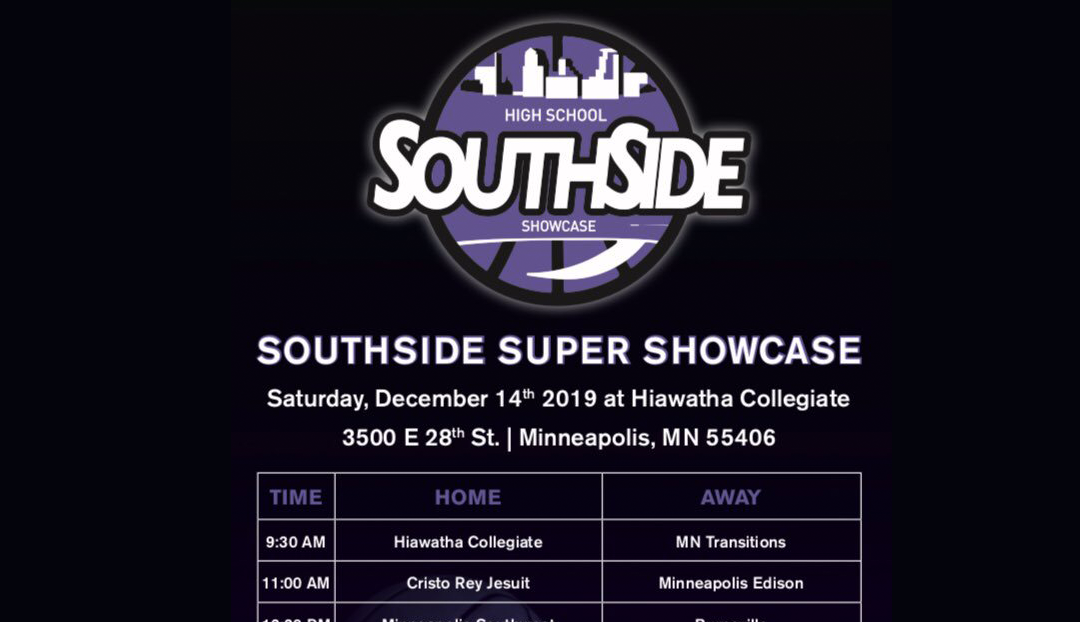 This weekend is another blockbuster line up showcasing talented Minnesota High School teams and another segment of talented players that the state possesses.  The Southside Super Showcase will be held at two locations this year due to the growth of the event in recent years; Minnehaha Academy (3100 W. River Parkway | Minneapolis, MN 55406) and Hiawatha Collegiate (3500 E. 28th St. Minneapolis, MN 55406) and  will be the 6th year of this event.  As we take a closer in depth look at some of the teams and players playing in this weekends event, the one thing to note is how much talent there will be hitting the courts this weekend.

9:30AM Hiawatha vs MTS – Both schools are located in South Minneapolis literally 5 blocks from each other.  Hiawatha is led by high scoring freshman, Jessye Lewis Jr.  Jessye is a prospect that made our 2023 Hot Prospects list as one of the top freshmen in the state.   MTS is led by Lashone Patterson avg. 17 ppg.

11:00AM Cristo Rey vs. Minneapolis Edison.- Cristo is  currently ranked #6 in class 2A. Cristo Rey is Coached by Coach Stanley Clay. He is a very good Coach that is no stranger to Coaching high major talent.  He Coached 6’10” Jericho Sims that currently plays at Texas University for Coach Shaka Smart.   They are led by Senior James Sommers who averaged over 25 pts. per game last year and is ready for a breakout senior year.  Edison is led by Head Coach Ahmil Jihad and his scrappy style of play.  They currently have one of the best scorers in the city conference in Jabari Langley – 6’1″ – G- 2021 is a player to watch.  Edison looks to build on a 17 win team from last year.

12:30PM Minneapolis Southwest vs. Burnsville – Southwest High School is led by first year coach Keenan Shelton.  Coach Shelton was the previous coach at Rosemount HS.  Burnsville will be led by Sr. All-Conference player Daniel Rosenbur along with freshman phenom lbo El-Amin point guard in the class of 2023.  Additional players to watch for include Sophomore Yarin Alexander – 6’4″ –  who’s been a bright spot in the early season.

2:00PM – Minneapolis South vs Waconia – South is led by legendary Coach Joe Hyser and Sr. guard Jaylen Blakley  who comes into this weekend avg. 16.5 points per game.  Waconia was a pre – season top 10 team and led by all conference forward PJ Hayes.  PJ Hayes is a 6’5″ smooth scorer who plays at his own pace and scores from all levels.  PJ Hayes is currently avg. 26.5 points per game early in the season.

3:30PM Hope Academy vs Rushford-Peterson – Hope Academy has a returning team that made it to the section final a year ago.  Coach Brothen is a staple in the South Minneapolis Community and is led by Sr. Caleb Holien and sophomore Elijah Wade.  Rushford-Peterson is a preseason top 5 team in 1A.  They are a traditional powerhouse program in Southern MN.  They are led by  sophomore Malachi Bunke

5:00PM Blake vs.  Byron – Blake has had a great start to the season led by the backcourt of Gabe Ganz and Robert Grace IV.  They have other weapons which makes them an exciting back court to watch.   Byron is a tough team that plays a tough schedule in Southern MN.  They are led by Jake Braaten who avg. 12 ppg.

6:30PM Minneapolis. Washburn vs St. Louis Park. The Millers, are led by elite scorer senior guard Josh Rogers.  St. Louis Park will Be led by Cole Ewald 14.7 ppg and Paris Johnson 13ppg.  Having two players averaging in double figures will bring excitement and a fast pace tempo to this game.

8:00PM Mayer Lutheran vs. Holy Family. Both teams are making the trip to South Minneapolis though they are located 15 minutes from each other in the SW MN area.  Mayer Lutheran was a preseason top 5 team in 1A.  They will be led by Senior Sean Buchanan and sophomore Teagan Martin.  Holy Family will feature Senior Guard Nick Hendler avg. 15 ppg.