In this first installment of our Hoop Stars Media Hot Prospect Pre – Season list, we take a look at some very polished incoming freshmen for the 2019 – 2020 season.  Our list of players are players that we have seen and covered over the course of the year from AAU, Winter travel and in some cases High School basketball.

This list is to bring recognition to the incoming freshmen players who have momentum coming into this season from the past high-school season as well as over the summer.  Some prospects from this group have already put up some major varsity production last season led by Jessye Lewis Jr averaging 23.2 who will be a feature player in our next release and Quyavant Douglas who avg. 17.4 ppg last season.  This list will continue to evolve as the season comes more into focus. This is a very tough class with some serious future college prospects. 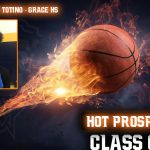 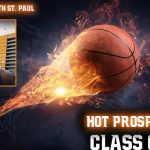 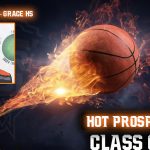 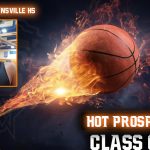 Ibo comes from a basketball talent rich family and is the son of Khalid El-amin.  Khalid a Minneapolis legend who won a national championship with University of Connecticut and then went on to  get drafted by the Chicago Bulls.  Ebo shows flashes of greatness like his father at a young age.  As a lead Point Guard, Ibo has a strong ability to run a team and live in the paint, something that is often difficult for young players.  As he continues to add layers to his game from the shooting category and being a player maker, his stock will rise as a guard.  Ibo attends Burnsville High School and will have an opportunity for major varsity mintunes this season for the Blazers.

Totino – Grace High School has hit the lottery with this incoming recruiting class of 2023 prospects.  Totino Grace  has 3 notable players that will be highlighted on the Hoop Stars Hot Prospect list.  What is a Hot prospect you may ask?  Taison Chatman is a prospect that comes to mind.  He had what may scouts call a breakout summer on the national scale.  Taison earned a spot through hard work and great play at the Chris Paul All American camp.  Each year kids from across the country make it their mission to earn an invitation to the prestigious camp.  Taison, is a name we will hear a lot this season as a 9th grader who will receive valuable varsity minutes and is ready to step into that role.  At 6’3″ and a true combo guard with a consistent jump shot range he is on pace to continue his breakout year at the high school level.

Quyavant Douglas is the best scorer in the class of 2023 as an 8th grader for Brooklyn Center. Quyavant avg. 17 + points per game for the Centaurs. He had all of the physical tools to compete at a school that plays a 3A schedule.  Leading into this season he is on pace to have major scoring out puts as he returns as the teams leading scorer.

Maximus Wilson is a 6’4″ Combo guard that has big play written all over his game.  Another high level national player that attended the Chris Paul CP3 camp and had many great performances.   Max as he is called, has been playing on the national stage since bitty ball and AAU nationals.  He has grown each year in every area, from shooting to ball handling.  He arguably is the best play making guard in the class and he does it effortlessly and enjoys making others better.  Long term, Max is positioning his game to transition as a Point guard.  South St. Paul High School is Coached by Coach Matthew Mcallister the former Brooklyn Center Coach.  A vetted Coach who is coming off of a state tournament run at Brooklyn Center.  Max is a varsity starter and stay tuned for a monster freshmen campaign.

CJ O’Hara is a 6’4″ super athletic small forward that is still growing and growing his game.  CJ is a wing that runs the floor hard and finishes well in transition.  He will see varsity time for Totino – Grace high school this season and already has the body to be an elite defender and he is part of the loaded freshmen class.  O’Hara has one of the highest ceiling as a prospect as he is just scratching the surface. As he continues to improve his skills, he will be a force to be reckoned with.

Deidrick plays for the Mpls. Hawks who is well Coached. He caught our eye this weekend in the @RoundballRemix He pressures the ball&is very active. He scores the ball well from inside & gets down hill. @HoopStarsCoachT

Raji is a quick Guard that plays end line to end line. He is a attack guard that makes plays off penetration. He racked up assist with the shooters & bigs that the 43 Hoops/Aurora has.
@TheNextLevel_ @HoopStarsCoachT

TF played in the @RoundballRemix this past weekend showing why he is one of the best PG regionally/Nationally. Coming back after a scary fall & controlling the game vs.TBE & hitting game winner @grassrootshoops @randycarter34

In watching Murphy play it stands out very quickly that he has a high IQ & is tough as nails. He stretches defenses with his ability to knock down shots. He will be one to watch🔥
@TheNextLevel_ @HoopStarsCoachT