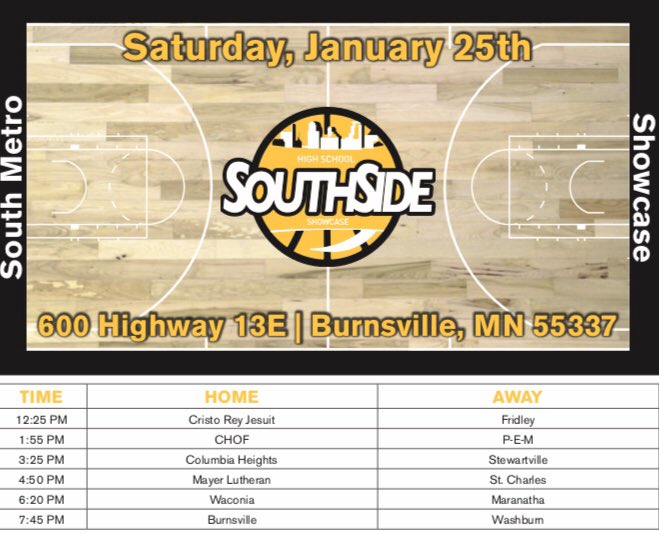 Cristo Rey vs Fridley: Cristo Rey has been in and out of the top 10 in Class AA all season. Led by senior James Sommer and Jr. Twins Derek and Erik Burgess. They will be contenders in Section 4AA. The Fridley Coach Mac is a newly inducted HOF coach.

CHOF v P-E-M: CHOF is coming off a berth in the state tournament last year and are favored to win section 4A for the second year in a row. They are led by Isaac Collins who is a matchup nightmare in Class A.  Keep on eye on Preston Alleman as well.  P-E-M is coming from Southern Minnesota and has played a tough schedule thus far.  Quality wins over Columbia Heights, Cooper, and close losses to Stewartville and Caledonia.  They will come in Saturday ready to compete.  P-E-M is led by Blake Herber and his almost averaging 24 ppg.

Columbia Heights vs Stewartville:  Heights comes in just cracking the top 10 in Class AAA. Heights are led by Jones and sophomores Alveraz and Muja Burton Heights.  Stewartville comes in ranked #8 in class AA.  The Metro gets a chance to see junior phenom Will Tschetter.  Will comes in averaging over 34 ppg.  He is an animal inside with a soft touch from deep.  He has multiple D1 mid-major offers.  Expect HM offers to come in this summer. Tschetter is not a one man show.  Also look out for Nolan Stier.  He can light it up from deep in a hurry.

Mayer Lutheran v St. Charles: Mayer Lutheran started off ranked in the top 5 in Class A.  Myaer Lutheran has had brutal schedule and multiple injuries have decimated Mayer early on this season. They look to get healthy and make a run during sections.  They are led by sophomore Tiegan Martin and senior Sean Buchanan.  St. Charles has competed well in arguably the toughest conference and section in  Class AA.   HOF coach Terry Knothe always has his guys ready to play. St. Charles is led by Kooper Vaughn.

Burnsville vs Washburn.  The host Burnsville team are led by Daniel Rosenbur, Yarin Alexander and freshman phenom Ibo El-Amin.  Burnsville is a team that is fun to watch and competes hard.  Washburn is led by senior Athletic wing Josh Rogers is an exciting prospect.

✨Hoop Stars Media✨ will be in the house this weekend covering some of the talent at the loaded @ny2lasports GrassrootsShowcase. They run some of the best events in the country....🔥 @HoopStarsCoachT

✨The Gonzaga Bulldogs @ZagMBB have hit the lottery with the No. 1 player in the country. 7'1" Chet Holmgren

This changes the game for the Bulldogs and can expect to them back in the national championship. Chet brings versatility to an already skilled team. @RedhawksAD

✨Where will he go @ChetHolmgren 7'1" Future NBA propsect✨

Who will be the lucky winner?

✨Big Day for the #1 player in the country 7'1" Chet Holmgren and the state of Minnesota✨ Timeline take over..

Who will be the lucky winner??? @grassrootshoops